Amelia’s Legacy has an interesting, believable, relatable cast of characters, including some unexpected ones in a surprise turn of events. The plot is well developed, and twists are sure to keep your attention and turning the pages.

Nancy struggles to wrench herself away from Grandmother’s grasp and become her own person, only to find Amelia Sanderson’s grip is tighter than she’d ever imagined. After tragedy strikes, Nancy is unsure of who she can trust but is more determined than ever to get answers to questions that have plagued her for years.

I would recommend this book to young adults and as well as adults who enjoy a clean inspirational, historical romance. This is much more than a girl-meets-boy story. It is a story of family love, faith, and forgiveness with an ample dose of suspense mixed in.

Nancy Sanderson  wanted nothing more than to be her own person, free from her domineering guardian grandmother. After all, she was old enough to make her own decisions, wasn’t she? Rejecting her grandmother’s well-ordered plan for her life, Nancy chose to find her freedom in exhilarating rendezvous with the handsome and exciting Nate Conners.

Amelia Woods Sanderson, Nancy’s guardian, will go to whatever lengths she deems necessary to protect her granddaughter. She’d run the family business as well as any man and strove to assure her only heir would be well taken care of — and well-connected after she was no longer there to care for her.

Nate Conners, the handsome and exciting college sophomore seemed to like Nancy as much as he appealed to her. “The fact that Grandmother would never approve of him made him even more interesting.”

Rebecca Lewis and Nancy (“of the Newport Lewises”) became friends and confidants after meeting during their cruise to Europe, and they became roommates at Jennings college.

I had a chance to ask the author a couple questions about her book.

What inspired you to choose the “Roaring Twenties” for the setting of your novel?

I’ve always had a fascination with the twenties. As a child I would spend hours looking through Grandma’s old pictures. There was one of a couple dressed in 1920s costumes (I thought) and I asked Grandma why they were dressed up like that. She told me that’s how they dressed back then. But she never did, since the flappers were considered “wild”—Grandma was a church girl, raised in a Southern Baptist church. When I was thinking about the setting for Amelia’s Legacy, I remembered that picture and thought it might be interesting to explore that time period.

How did Nancy and Amelia introduce themselves to you?

I saw the young Nancy sitting in that chair, enduring another scolding from her stern Grandmother. She “zoned out” as I often did, when I was subjected to a lecture. Sometimes I still do that. When she first popped into my head, sitting there like that, I realized she was a dreamer like me. But where I only dreamed about rebellion, she actually carried it out. Grandmother was stern because she had to be. She was a successful businesswoman in a day when men ruled the corporate ladders. These two women were dependent upon each other, but their relationship was a rocky one.

I actually really liked Amelia’s character, because she acted out of love, and I suppose that was her greatest legacy. 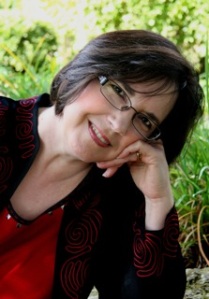 articles and interviews to various blogs around the Internet and is an active member of American Christian Fiction Writers (ACFW), where she leads a critique group. She’s also a mentor, assisting other writers. She is a co-founder of a blog dedicated to inspiring writers, and a contributing editor for the soon-to-be launched online magazine, Imaginate.

Her 20’s era romance, Amelia’s Legacy, Book 1, Legacy Series, released October, 2014 (Write Integrity Press). She also writes contemporary stories as a co-author of A Dozen Apologies and its sequel, The Love Boat Bachelor, releasing January 26, 2015. She has two fantasy-adventure novels, The Lady of the Haven and A Gathering of Eagles, in a second edition published by Sign of the Whale Books TM, an imprint of Olivia Kimbrell PressTM. Coming up next, a 1950’s historical novel based on the Book of Ruth, Annabelle’s Ruth, Book 1, Ruth Series (Write Integrity Press).