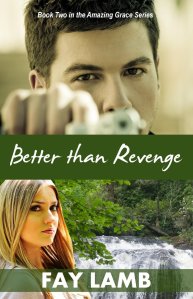 Oftentimes, a support character provides depth, additional interest and an unexpected twist to a story. In Better Than Revenge, Kip Turner does just that. Today, I’m privileged to interview Kip and find out what makes him tick.

Kip, how did you meet Michael Hayes, and why were you mortal enemies at one time?
I met Michael through a mutual acquaintance, Tom Jervis. Jervis and I were planning a criminal act against a local authority, and Michael and his gal, Isabel—or Issie, as he calls her—joined us in planning the crime. Then Jervis and I discovered that Michael and Isabel were out to thwart our attempt. I did something pretty heinous, something I wish I could take back. I hurt both Michael and Issie terribly. I’d like to say it was because I wasn’t thinking straight, but that doesn’t make it right. I had a lot of hurt back then. A world of it. I guess I just wanted Michael to hurt as badly as I did so I took away from him what I had also lost.

How did you manage to forgive Michael after what he tried to do to you?
Well, after what I did to Michael, and to Isabel, I wouldn’t have blamed him if he never forgave me, but Jervis harmed a family member, and she let me know about it. She forgave me for bringing Jervis into our lives, and she begged me to talk to my pastor. It took a while for the pastor to get through to me, and it took a while for Michael to forgive me. Let’s just say that I had to show him forgiveness first. That’s what God used to open Michael’s heart. And I thank Him for that every day.

What impression do you make on people when they first meet you?
I have a scar. A pretty ugly one. I’m sure people don’t want to even look at me at first, but I’ve gotten good at bringing them around. It isn’t really me I want them to see. I want them to see Christ in me. In order for them to do that, I need to get beyond that first impression. If they ask, I’m direct. It’s a good tool for evangelism.

How do you use this in a positive way?
I just don’t let it bother me. Soon they see past that barrier. I have a scar. A pretty ugly one. But God gave it to me via my best friend, and I’ll bear it if only to remember never to go back into the darkness of sin so deeply that I would ever harm another the way I harmed Michael and his gal. And like I said, if someone asks, I use it to share a story of profound forgiveness.

What in your life has had the most profound effect on you? Michael Hayes’ son called me “Uncle Kip.” I’d never let on to Michael. I’m tougher than that, but Cole really melted my heart with that one. Just the thought that the man who suffered so dearly at my hands, who lost so much, that his son would love me enough to give me that title…it’s beyond the imagination, as are all of God’s miracles.

What is your main goal in life now?
To live for Christ. To be His servant, and to follow His path for me. And well, I’d like to win at least one fishing bet with my brother-in-law, Ted.

If you could change one thing about yourself, what would it be?
I’d go back to the night eight years ago, and I’d hold a gun on Tom Jervis and not on Michael.

Michael, here: I understand what Kip is saying about that night. Some pretty awful stuff went down. Issie and I suffered through a lot of dark years, not only because of Kip and Jervis’s actions, but I made some pretty stupid mistakes myself. But I’m sure Kip will agree that when we trust in Him, He will turn our worse mistakes into the greatest blessing. Kip might love to hear Cole call him Uncle, but it isn’t nearly as powerful as hearing him call me Dad.

Isabel “Issie” Putnam’s sole agenda was protecting her son, Cole— from the truth—and from the man who wanted to take away from her the thing that mattered to her most, just as he had taken something very precious from her eight years ago—something she could never get back. Issie’s family seemed to be working against her in favor of their own selfish desires, but Tom Jervis must be stopped. What did the family do to put Issie and Cole in more danger than ever, and could the family ever be reconciled?

Fay Lamb works as an acquisition editor for Pelican Book Group. In addition to Better Than Revenge, she’s had Stalking Willow, Charisse, and The Art of Characterization published. She’s contributed to collaborative novellas from Write Integrity Press, including A Ruby Christmas, A Dozen Apologies, and Christmas Tree Treasure Hunt. Several more of Fay’s books are due to release in the near future. At her website, http://faylamb.com, you can access her blogs, Inner Source, On The Ledge, and Tactical Editor, as well as learn more about Fay.

This entry was posted on Tuesday, March 4th, 2014 at 8:15 AM and is filed under CHARACTER INTERVIEWS. You can follow any responses to this entry through the RSS 2.0 feed. You can leave a response, or trackback from your own site.