Meet the Characters in Stalking Willow by Fay Lamb

Beneath her professional persona, Willow Thomas’s heart harbored resentment. She had reason to be bitter—in fact, many reasons. As much as she loved Granny, she’d lied to Willow, concocting a story about her parents. The truth was her mother hadn’t wanted her, and her father’s devotion to his wife and his ambition were stronger than his love for his daughter. Her aunt hated her. Her cousin, Laurel, whom she’d grown up with, had turned on her. Even Quentin had ignored her all through high school.

After the paparazzi created chaos in Amazing Grace revealing the story of the starlet who’d abandoned her daughter, Granny died. Willow fled the little town for New York City without even as much as saying goodbye.

So, why would a stalker be the catalyst that brought her back home? Who was he and what did he want from her? It seemed she couldn’t hide from him, not even in Amazing Grace. Amidst her fear and confusion, could she trust her first and only love for support?

Fay Lamb has created plenty of action and suspense to keep the plot moving at a perfect pace and the reader intrigued. There are so many interesting characters in this book, it’s difficult to condense the list. However, here are some of the main ones:

Willow Thomas couldn’t rely on anyone. She didn’t even trust God anymore. After all, she thought, what kind of life had He given her? One of deceit, loneliness, and resentment. And now–fear.

Quentin McPheron lived next door to Willow as she grew up under Granny’s care. They’d played together as children, practically inseparable. As a teenager she’d hidden in the woods and sketched him as he relaxed on the dock with his fishing pole. She loved him, but she couldn’t seem to get his attention until…

Laurel Thomas was Willow’s cousin and nemesis since high school. Why did the two cousins dislike each other so? Some time during the ten years of Willow’s absence, what had happened to change Laurel’s life and what effect would it have on the prodigal cousin?

Granny Thomas raised Willow from infancy. From what was she trying to protect Willow by fabricating the lie about her parents? Would the snippets of wisdom left around her house be enough to begin the healing process for her granddaughters?

Agatha Thomas, “Aunt Aggie,” lived with bitterness and jealousy for so long, she couldn’t seem to get along with anyone. But why? She hadn’t smiled in years, let alone laughed. And now Willow was back in town. Harrumph!

Bear – Who was this man who lived in the cabin behind Granny’s house? And how did he know so much about Willow?

LeBlanc thrived on terrorizing women a little at a time then killing them and watching the life seep from their bodies. He focused his sights on Willow Thomas. Why Willow? Where had he come from and what evoked this psychotic mentality?

Fay Lamb’s career has escalated to new heights in the past year, and she’s definitely an author to watch for more 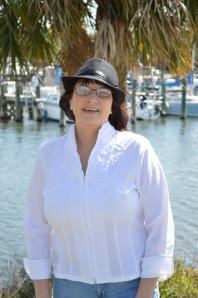 exciting Christian fiction. After the release of Because of Me last year, she co-authored The Christmas Tree Hunt and signed with Write Integrity Press for two series.  Stalking Willow is the first in her Amazing Grace series.  The first book in The Ties That Bind series, Charisse releases next month.

Fay’s heart and ministry are in helping other writers achieve their dreams and be the best writers they can be. A member of American Christian Fiction Writers, she has served as secretary of the operating board and moderator of the Scribes critique group within the organization. She’s a founder of the ACFW Central Florida Chapter and currently serves as advisor to that group.

Learn more about Fay and read her blog, On The Ledge, at her website, www.FayLamb.com, and purchase her books at www.Amazon.com, www.Barnesandnoblecom, www.Christianbook.com, or at your local bookstore.

This entry was posted on Thursday, June 13th, 2013 at 7:11 PM and is filed under BOOK REVIEWS. You can follow any responses to this entry through the RSS 2.0 feed. You can leave a response, or trackback from your own site.